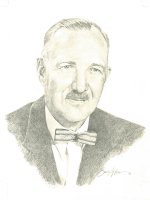 Nominated by: The Co-operators

Born in Huron County, Arthur Musgrave owned and operated a mixed farm and apple orchard in Clarksburg, Ontario. His education at the Ontario Agricultural College (OAC), Guelph, was interrupted to serve in the armed forces during World War I, but he returned to the OAC and graduated in 1920. He worked as a writer and reporter for the Farmer’s Sun, a farm publication started in 1891 that preceded the Rural Co-operator and is the current Farm and Country.

Musgrave’s commitment to co-operatives and his ongoing development of co-operatives were of lasting benefit to the agricultural community. In 1945 he was retained by the Cooperative Union of Ontario to establish a training school for those interested in becoming employees of the co-operative system. He taught much of the co-operative philosophy himself, recruiting specialized instructors for such subjects as accounting, law, advertising and personnel management.

Mr. Musgrave was instrumental in establishing the Cooperative Fidelity and Guarantee Association, one of the organizations, which combined with co-operative insurers from other areas of Canada to form the present Cooperators Group.

Art Musgrave’s commitment to the co-operative movement and his skills as a mediator and facilitator left a lasting impression on the Agricultural industry.