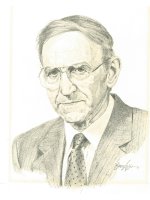 Abner Martin was born and raised in Waterloo County. When he took over the family farm the dairy herd consisted mostly of Jerseys.

Abner moved his family to a larger farm unit in 1945 and added Holsteins to the herd. In his work with Holstein cattle he showed a willingness to adopt effective production management tools such as artificial insemination and later embryo transfer. Mr. Martin built one of the best herds in the province and was awarded a Master Breeders Shield from the Holstein Association of Canada, an organization in which he served on the board for 15 years and as President from 1971 – 72. He worked on the development of a Canadian True Type Model and the registration of red and white Holsteins.

In 1962, Abner was a partner in the purchase of the Kitchener Stockyards and eventually became its Manager. He served as President of the Ontario Livestock Auction Association and helped found the Livestock Market Association of Canada. He worked with county Agricultural Representatives and the Ontario Department of Economics to encourage farmers to keep better accounting records and this lead to the formation of the Waterloo County Farm Business Management Association of which Abner became the first President.

While Manager of the Stockyards, he saw the need to update the type of beef cattle and imported Limousin cattle from France on three occasions. He became President and Treasurer of the Ontario Limousin Association, and with prominent Limousin breeders and experts from the University of Guelph, developed a classification system for beef cattle and became the first Limousin breed classifier.

Abner Martin served as Co-Chairman of the International Plowing Match in 1954 and was named Farmer of the Year in 1960. He served as a Member of Woolwich Council for five years and was Reeve for two. In retirement, Abner bred and raced Standardbred horses and became involved with the Elmira Agricultural Society and raceway management.

In agriculture and community work, Abner was a leader and had a willingness to try new methods.