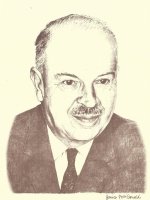 Albert Maxwell Barr had a vision for agriculture which saw an Industry both prosperous and challenging enough to attract the type of well-trained students who were graduating from Kemptville Agricultural School (K.A.S.) while he was Principal.

Albert Barr began his career with the Agriculture Representatives Branch, serving in Huron, Grenville, Brant and Stormont, amassing a wealth of information about Ontario agriculture along the way. He was an early advocate of the importance of the use of tile drainage for farm land and municipal drains. He was also a particularly astute judge of cattle, and in 1943 he was selected as an Official Judge of the Holstein-Friesian breed. He went on to utilize that skill in a number of ways, including as a judge at the Ontario Royal Winter Fair and as the coach of the Junior Farmers Judging Team in England and Scotland in 1950.

In 1948, he became the Assistant Director of Extension in the Ontario Department of Agriculture, and was given the responsibility of supervising the development of the Boys and Girls Clubs, now known as 4-H. It was during this time that his dedication to the training and skills development of rural Ontario youth was recognized.

In 1951, Ab Barr became the Principal of Kemptville Agricultural School, where he set out to develop the school so that it became a significant contributor to the practical agricultural knowledge required by the graduates to improve and expand Ontario agriculture. He also worked hard to ensure that the Research and Development at K.A.S. was accessible and useful to Ontario farmers. Before Principal Barr retired from the school in 1966, he had overseen the establishment of facilities for engineering, poultry science, home economics, the Regional Veterinary Services Lab, a dairy building which housed the Milk Laboratory and the Cheese Research Centre, additional land for field crop trials and a beef bull performance testing unit. Thanks to his outstanding knowledge of livestock, Professor Barr was also responsible for building an outstanding dairy herd at Kemptville.

In addition to providing instruction to the students, he also developed a group of excellent Extension Specialists whose goal was to continually improve farming practices in Ontario in such diverse areas as horticulture, poultry, dairy, beef, engineering farm buildings, soil and crop improvement, artificial insemination, drainage and livestock nutrition. During his tenure as Principal, the number of students increased 200%.

In addition, during this time (1945-65), Albert Barr also served as the Moderator of the Radio Farm Forum program, which was designed to further extend leading edge agricultural knowledge to those farmers who continued to improve and grow their operations.

After retiring from Kemptville in 1966, Ab Barr became an advisor in animal husbandry to CIDA (Canadian International Development Agency) in Uganda and Trinidad. He also served on the Sire Selection Committee for Eastern Breeders Inc. in the 1950’s and 60’s,where he advised on the purchase of several top bulls such as Lassie Leader, Seiling Rockman and Rockdale President. This expertise helped to improve dairy genetics in Ontario and elsewhere. He also served on the Ottawa National Capital Commission for the Greenbelt Farms. Albert Barr left a legacy for Ontario agriculture that included hundreds of well educated rural youth, and research and extension that led the way to great strides forward for agricultural productivity in Ontario.

The Agricultural Hall of Fame is proud to induct Albert Maxwell Barr to recognize his outstanding contributions to Ontario agriculture.