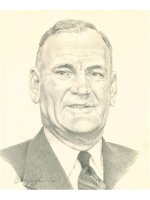 Alex M. Stewart of Alisa Craig devoted his life to the selection, production and distribution of high quality seed grain. His contribution was recognized by the Canadian Seed Growers’ Association who presented him with their highest honour; the Robertson Associate Award. Mr. Stewart was twice World Oat King at the International Livestock and Grain Show in Chicago.

With his son John A., he founded the seed firm of Alex M. Stewart and Son, which received world recognition for breeding, selection and distribution of seed grains when as many as 210 carloads of pedigreed seed were distributed in a year. He was the first president of the Ontario Soil and Crop Improvement Association, a director and president of the Canadian Seed Growers’ Association, chairman of the seed section and director, Royal Agricultural Winter Fair. He was first chairman of the Ontario Stock Yards Board and served in many capacities in his home community.

He was keenly aware of the need for quickly making available new and better varieties and he instigated the development of “early” hybrid corn for Ontario Farms.