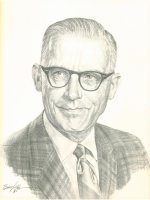 A fourth-generation farmer of the family’s Peel County acres, Alex McKinney was an early recruit to the Junior Farmer’s movement. He was President of his County group in 1924. Cows in his dairy herd held both the Canadian and World records for milk and butterfat production. In 1946, Alex McKinney received the Master Breeder Award.

Mr. McKinney was judge of both grain and livestock at local fairs and international shows. He was Chairman of the Grain Section at the Royal Agricultural Winter Fair for two years, and served as Councillor, Deputy-Reeve and seven years as Reeve of Chinguacousy Township.

For his work in seed grain production, Alex McKinney was granted the Robertson Associate Award of the Canadian Seed Growers’ Association.