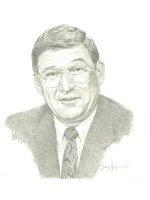 Alex Connell, a graduate of the Ontario Agricultural College diploma in Agriculture program and his brother operated the family-owned Connell Farms in Wellington County consisting of 1,700 acres and a large beef feedlot. Alex Connell earned his reputation for leadership, honesty and fair dealing in growing, processing and marketing superior pedigreed seed and operating a beef feedlot. Alex shared his leadership skills in the 4-H and Junior Farmer organizations, serving as President of the Junior Farmers’ Association of Ontario in 1964. He was awarded a Junior Farmer traveling scholarship to Great Britain. His enthusiasm and leadership skills were evident at all levels in the pedigreed seed industry where he actively participated locally, provincially, nationally and in the International Association of Ontario Seed Certifying Agencies.

Alex served on the team that created the Canadian Seed Institute, which delivers a consistent, cost effective monitoring and accreditation system for the seed industry. Alex Connell judged crop classes at fairs and exhibitions. He was one of the founding shareholders of First Line Seeds, a respected grower-owned Ontario seed company.

In addition to being a member of the Ontario Cattlemen’s Association for many years, Alex served as its President in 1978, and participated for three terms on the Advisory Committee to the Dean of the Ontario Veterinary College at the University of Guelph.

He was named Honourary Life Member of the Ontario Institute of Agrologists in 1999. Alex Connell was active in his church and the rural community in addition to contributing to agricultural research and the promotion and adoption of new technology.