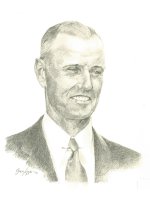 Alvan Ralph, after World War I service, purchased a Carleton County farm in 1919, near Burritt’s Rapids. There he bred and raised Registered Holstein cattle, many of which were exported to the U.S.A. Mr. Ralph followed closely a Department of Agriculture experiment in artificial insemination (AI) of cattle between 1944 and 1947 in the Forfar area.

Realizing the possibility of improving genetics in Eastern Ontario cattle, he led in the establishment, in 1947, of the Eastern Ontario Cattle Breeding Association, one of the significant events of this century for area producers. As President of the Association, Mr. Ralph was instrumental in establishing an Artificial Insemination Unit in 1947. Using his own resources to expedite the transaction on behalf of the new Association, Alvan Ralph purchased the Hurlburt property of 100 acres near Kemptville College with buildings suited to housing an operating AI Unit. He continued to lead the Association as President through the formative years until 1951.

The work of the Eastern Ontario Cattle Breeding Association was noted in the rest of the Province, with similar units established in 1948 in the Quinte and Maple areas. These developments helped the Province of Ontario become a leader in improving the genetics of dairy cattle in Ontario, the U.S.A. and around the world. Eastern Breeders is now associated with Semex Alliance, an organization of Canadian breeding Units focused on global leadership in the livestock genetics marketplace. It is also the home location of the International Livestock Management School” providing expertise in genetics and animal breeding to many developing countries.

Alvan Ralph led and promoted tile drainage, commercial fertilizers and pedigreed seed. He encouraged young people to become involved in agriculture through School Fairs, Calf Clubs, 4-H Clubs, and Junior Farmers. He opened his farm to such groups and three of his sons have become leaders in the dairy, fertilizer and seed industries in this country.