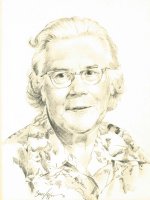 Anna P. Lewis epitomizes the second generation of Women’s Institute leadership: strong, capable, and dedicated. Born to a Women’s Institute member on a century farm near Newmarket, Ontario, Anna grew up with the organization. Her membership with a local Junior Institute stimulated her interest in Home Economics and she went on to graduate with Honours from the University of Toronto. Miss Lewis completed post-graduate work at Columbia University and acquired a teacher’s certificate from the Ontario College of Education.

After working as a dietitian at hospitals in Toronto, Cornwall and Weston, in 1941 Anna switched to teaching Home Economics in St. Thomas, Ontario. In 1945 she left teaching to become the Director of the Women’s Institute Branch and Home Economics Service of the Ontario Department of Agriculture. In the next ten years under her capable management, the number of Institutes and Institute members in Ontario increased significantly, as a result of her emphasis on increasing the number and variety of extension courses available to rural women.

Her work with rural youth, particularly her role in helping oversee the transition of Junior Homemaking clubs to 4-H clubs, also marked an important stage in rural youth extension. A personal highlight of her tenure was the role she played in planning the 50th Anniversary celebration of the Women’s Institute movement in Ontario, particularly her work writing and directing a pageant entitled, “Let There Be Light.”

In 1955, Miss Lewis left the Department of Agriculture to marry. Her work though, did not stop for she continued to teach Home Economics in Fergus and Guelph until 1972, volunteering and playing an important role with the Women’s Institute through the Royal City Branch of Guelph and with the Associated Country Women of the World. She also developed a keen interest in history working with the Ontario Genealogical Society and serving on the Board of Management on the York Pioneer and Historical Society, Sharon Temple.