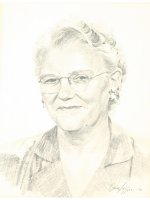 Nominated by: Women’s Institutes of Ontario

Born near Napanee, Ontario, Annie Gertrude Haggerty devoted her life to the Women’s Institute organization. An active member for 36 years, she held numerous offices at the branch level, and served as President of the District, Provincial and National groups.

Mrs. Haggerty worked on the Provincial Women’s Institute Scholarship and Handbook Committees. In 1959, she was honoured with the naming of the Annie G. Haggerty Scholarship. While President of the Federated Women’s Institutes of Canada, she attended the World Food Congress in Washington and later represented Canada on the Associated Country Women of the World tour in 1962. She was the first National President to visit the North West Territories.

Mrs. Haggerty served her community well as 4-H Homemaking Club leader, President of the Women’s Missionary Society and President of the County Sunday School organization. In 1963, the Napanee Business and Professional Women’s Club chose her “Woman of the Year.”

In 1967, Annie Gertrude Haggerty was presented to Queen Elizabeth and Prince Phillip and was the recipient of the Centennial Medal for “Her contributions made to Canada during these 100 years”.