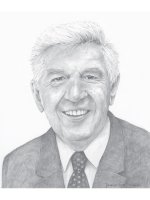 Arthur Loughton moved from the UK to take up a research position at the Vineland Research Station in 1967. His research focused on a variety of vegetable crops including rhubarb, asparagus, cole crops, cucumbers, tomatoes, peppers and greenhouse crops. He was responsible for the introduction of the seedless English cucumber to the greenhouse industry. He researched methods for asparagus to improve yield and profitability for asparagus growers. He began the only publicly-funded mushroom research program in Canada, and he helped establish broccoli as the “wonder” vegetable, now worth $25 million annually at the farm gate.

In 1975, Arthur was promoted as Director of the Horticulture Research Station in Simcoe until he retired in 1996. Here he began a successful program to find alternative crops to diversify the tobacco acreage in Norfolk County so it now is one of the most diverse cropping areas in the Province.

He also worked with commercial seed producers such as Stokes Seeds to ensure they were aware of the development of improved varieties so they could adjust their production programs to have seed available for the growers so they remained competitive.

Administratively, he was known for maintaining harmonious relationships within the scientific community and securing the finances to enable the Simcoe Research Station to conduct quality research for the ongoing benefit of the Ontario horticulture industry.

Loughton also edited two books on Ontario horticulture research at both Vineland and Simcoe Horticulture Research Stations. His research work and excellent working relationship with the seed industry was recognized by Stokes Seeds which named a “Loughton” cabbage variety in his honour, and in 2000, the Ontario Institute of Agrologists acknowledged him as a Distinguished Agrologist.