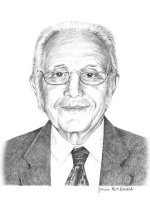 Art Bolton became a “Select” pedigreed seed producer in 1966. Since then, he has steadily built his reputation as an expert in the complexities of the regulations and procedures for growing and processing seed crops, and as a visionary in the accreditation and development of the seed industry in Ontario and Canada. Art is one of those rare individuals who has talents in business, science, organizational management and big-picture strategic analysis. His pedigreed seed business received the Long Service Certificate from the Canadian Seed Growers Association in 2010 for 45 years as a seed grower, and Art and his son Carl continue the business today.

After graduating from OAC in 1955 with a degree in Agricultural Engineering, Art initially took on the position of Assistant Ag Rep in Huron County. But the lure of farming drew him to follow in his father’s footsteps in the seed business, and in 1985, R. T. Bolton and Sons became an Authorized Seed Establishment under the Canada Seeds Act. Shortly after the founding of SeCan in 1976, R. T. Bolton and Sons became a member of SeCan which is a private not-for-profit corporation with 700 members and currently has 430 varieties from which $70 million in royalties has been returned to research funding.

The Canadian Seed Growers’ Association elected Art a Robertson Associate in 1997 which is the highest award for a member of the CSGA for service to the Association and to Canadian Agriculture. Then in 1992, Art Bolton became the founding President of Advantage Seed Growers and Processors Inc. The shareholders are small and medium sized Ontario seed growers with exclusive rights to reproduce several varieties of winter wheat, barley, oats, soybeans and white beans.

Art also turned his attention to the broader seed sector where he has successfully made valuable contributions to an industry in which Canada has become a world leader. He served on the Ontario Seed Growers’ Association from 1982-96 during a time when major issues had to be managed, such as Plant Breeders Rights, the exclusive release of varieties, and the CFIA becoming responsible for seed purity and inspections. Ultimately, in 1999, the Canadian Seed Institute (CSI) was established, and with Art’s mediating skills, a new quality control program for Seed Establishments was successfully promoted. The CSI had the mandate to be the single point contact for all Canadian seed establishments, seed laboratories and for operators’ and graders’ licensing or accreditation. It helps the pedigreed seed industry maintain the highest level of quality during the handling, processing and packaging of seed.

Given the national scope of the Seeds Act and the complex relationship of provincial branches and federal regulations under the CFIA, Art Bolton went on to serve on the Canadian Seed Growers’ Association (CSGA) for 10 years and was President from 2001-2003. During this time, he assisted in the establishment of guidelines for safe storage and handling of treated seed; the exemption of corn seed from variety registration which challenged CSGA to certify unregistered varieties; and the introduction of minor crops such as hemp for certification.

Art also served on the Ontario Crop Insurance Commission from 1970-1980, during which time regulations were written to cover an additional 30 crops. He has also served on the Ontario Pulse Committee for 30 years and has done much to develop a management strategy for anthracnose and the advancement of new white bean varieties. Through the Ontario Wheat Producers Marketing Board, he worked on behalf of the Ontario Seed Growers to design a better plan for marketing seed wheat, as well as to develop varieties with special qualities for specific end-use cooking oils. In 2012, Art was awarded the Queen Elizabeth ll Diamond Jubilee Medal for contributions to Canadian agriculture and to the development of young farmers.

Arthur Bolton has left a lasting legacy in managing change and renewal in the Canadian and Ontario seed industry to enable it to grow and prosper on a foundation of excellence.

Welcome, Art, to the Ontario Agricultural Hall of Fame.