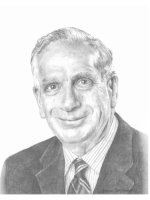 Bruce Christie had a 43-year career with Shur-Gain, which is the Animal Nutrition business of Maple Leaf Foods. As Marketing Manager, Bruce was responsible for the introduction of many innovative livestock, poultry and pet products. He also played a leadership role in the development of Maple Leaf’s Signature Pork program in the late 1990s and in standardizing programs in the areas of swine genetics, health management, nutrition and carcass quality in order to facilitate sales to countries such as Japan, Korea and China. During this time, he also supported the establishment of the Model Farm at the CNE to educate urban Canadians about livestock agriculture.

He was a driving force behind the Canadian Agri-Marketing Association (CAMA) in 1966 to encourage the exchange of marketing ideas for the benefit of Canadian agriculture. He was both a member of CAMA and a past president. He also chaired the Canadian Feed Industry Association (now the Animal Nutrition Association of Canada) and was instrumental in having the National Feed Regulations re-written. In addition, he was an active member of the Canadian Agricultural Research Council which created the Recommended Codes of Practice for the Care and Handling of Farm Animals. As often the only agri-business representative at the table, Bruce provided an important voice of reason with a practical, business-like approach. He then helped champion the development of the National Farm Animal Care Council which is now responsible for the national Codes of Practice.

Throughout all this, he continually championed responsible animal care and became the Chair of the Ontario Farm Animal Council from 1999 to 2012. Here, he led the initiative to join forces with AGCare, a crop specific organization, in order to create a new coalition of plant and animal agriculture called Farm & Food Care Ontario. In 2010. Bruce is the inaugural Chair of what is now Farm & Food Care Canada, and he has worked tirelessly through this organization to maintain the public’s trust and confidence in food and farming in Ontario and Canada. In 2014, Bruce and his daughter Jennifer climbed Mount Kilimanjaro to raise funds for the Farm & Food Care Foundation.

Bruce Christie has been the Chair of the Expert Committee on Farm Animal Welfare and Behaviour. He was a mentor for the Internship for Young Leaders program offered through a partnership between the Junior Farmers’ Association of Canada and the Ontario Agricultural College. He was the Chair of the OAC Alumni Foundation 2008-2011; the President of the OAC Alumni Association 1998-99; and a member and Chair of the University of Guelph’s President’s Advisory Committee 2008-2011.

His many far-sighted efforts on behalf of livestock agriculture and food production in Ontario and Canada were recognized by presenting him with the Canadian Feed Industry Association’s Golden Award for dedicated industry leadership in the advancement of livestock and food in Canada. Bruce was also made an Honourary Life Member of the Ontario Institute of Agrologists in 2002, in recognition of his outstanding contribution to agriculture in Ontario.

Bruce Christie will be an impressive and deserving addition to the Ontario Agricultural Hall of Fame.