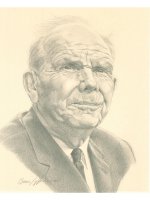 Bruce Bradley was born and educated in Toledo, Ohio. studying agriculture at the University of for two years before immigrating to Canada. In 1912 where he developed 1,655 acres of low, marshy land in Dover Township, Kent County. He successfully overcame the hazards of seasonal flooding and became an authority on drainage, flood control, water and soil conservation.

In this reclaimed areas, he pioneered the successful production of such crops as seed com, sugar beets, potatoes, garden crops and flax. He was one of the first successful growers or Burley tobacco and led the way in developing bulk handling, mechanical harvesting and forced air storage facilities for the many crops he produced. Bruce Bradley was equally enthusiastic in his livestock endeavours, raising beef cattle and Landrace hogs. Although he tamed the marsh for agriculture, he remained a dedicated conservationist and was a close friend and associate of Jack Miner. He encouraged the local Indians to return to their crafts and assisted in developing a market for them.

Ontario’s many successes in muckland agriculture are a testimony to the foresight, the strength, and the common sense of Bruce Bradley, humanitarian and a man with a thousand interests.