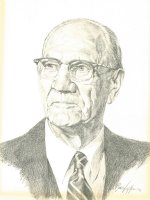 Born in Norfolk County, Bruce Wallace devoted his whole career to the horticultural industry. He served the Norfolk Fruit Growers’ Association for many years as bookkeeper, secretary and, from 1941-1963, as manager. During the same period, he was manager of the Norfolk Berry Growers’ Association from 1948-1963. Bruce operated a farm and apple orchard with his brother Gordon from 1936 to 1978.

His enthusiasm and knowledge of the industry resulted in his extensive involvement with numerous industry organizations. Bruce was President of Ontario Fruit and Vegetable Growers’ Association in 1948 and a Director for many years, as well as President of Canadian Horticultural Council 1951-1952 and a Director for many years. He served as Director, International Apple Association, Washington, and in 1962 represented the Canadian Horticultural Council at the Commonwealth Fruit Conference, London, England.

Bruce Wallace was well respected throughout the horticultural industry and was honoured with numerous awards for his dedication to the industry. He received the Award of Merit from the Ontario Fruit and Vegetable Association in 1952, and in the same year, The Queen’s Coronation medal on nomination of the Directors of the Canadian Horticultural Council. On nomination of the same Council, he was awarded the Queen’s Anniversary Medal in 1977.

A devoted family man and active in community affairs, Bruce joined the Simcoe Lions Club in 1940, served as President in 1964 and became a life member in 1990.