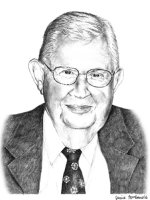 Nominated by: The Ontario Bean Producers’ Marketing Board

Charles Broadwell was the General Manager of The Ontario Bean Producers’ Marketing Board for 26 years from 1967-93. In this position, he traveled to over 70 countries marketing the white, pea and yellow-eyed beans grown by Ontario farmers who raise the vast majority of Canadian beans. Mr. Broadwell sold approximately $50 million of beans annually on behalf of these producers, dealing with brokers, buyers and canners all over the world. He was known widely as an excellent salesman, with great executive talents and a wonderful, positive disposition. He certainly established the Ontario bean industry as a thriving business, and he kept producers informed about the business with a publication he edited called The Emerging Bean.

Mr. Broadwell was active with The International Pulse Trade and Industry Confederation which was established to enforce trade standards on a worldwide basis to protect both the buyers and sellers of pulses (a generic term for peas, beans and lentils). He served six years as its President and was the only Canadian to serve in that capacity. He was also President of the Canadian Bean Council where he continued to promote beans as a cheap and nutritious food and to open new markets.

But his involvement in furthering the interests of agriculture did not stop there. He was a President of the Agricultural Institute of Canada; a President of the Ontario Institute of Agrologists; a President of the AIC Research Foundation; a member of the Federal Task Force on Agri-Food Trade Developments; and a member of the Canadian Society of Extension. His outstanding work on these boards won him considerable recognition including the OIA’s Distinguished Agrologists Award in 1989, the AIC’s Fellowship in 1990 and the Norry-Hilliard Award in 1996,along with his wife Noreen, for the promotion of agrology in Ontario. He and Noreen became the only husband and wife team to receive this award and they are also Honorary Companions of the University of Guelph.

Charles Broadwell leaves a legacy of hard work on behalf of agriculture in Ontario and Canada, and he is certainly a founding father of the bean industry in Ontario and the rest of the country, an industry which continues to thrive and to market Canadian beans around the world.