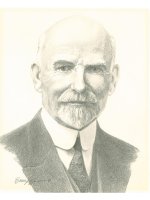 Charles Zavitz was a native of Coldstream in Middlesex County. He was a member of the first graduating class of the Ontario Agricultural College in 1888 and for 41 years, he was actively engaged in teaching and research on the Guelph campus. In 1883 he was placed in charge of all field crop experimental work. In 1904 he was appointed Professor of Field Husbandry and Director of Field Experiments, later being named Head of the Field Husbandry Department.

Dr. Zavitz is best known for his work in cereal grains and his system of test plots. His greatest achievement was the development of OAC 21 Barley, but over 15 years he introduced many other varieties of cereal grains to Ontario farms.

Ontario’s success with alfalfa is attributed to Dr. Zavitz, and he was also a strong advocate of soybeans.

His potato research was nationally accepted and he wrote a wide range of bulletins and publications.