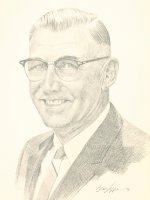 Nominated by: United Co-operatives of Ontario

An Essex County native, Charlie Huffman worked his entire life for the betterment of agriculture and the quality of rural life in Ontario. As a vegetable grower in the Harrow area and an ardent believer in co-operation, Mr. Huffman was a leader in the organization and administration of the Harrow Potato Growers and Harrow Farmers Co-ops.

Carrying his belief in the co-operative movement to the provincial level, Charlie Huffman served as President of the Ontario Fruit and Vegetable Growers’ Association in 1957and then held the post of Director of the United Cooperatives of Ontario from 1962 to 1974. He was also named President of what is now known as The Cooperators Insurance Company in 1963. Mr. Huffman went on to hold a two-year term as President of the Ontario Federation of Agriculture and in 1966 joined the Executive Board becoming Chairman of the Advisory Committee of the Canadian Livestock Feed Board from 1973 to 1978.

In his community Charlie Huffman served twenty years as Trustee of the Harrow District High School Board of Education and was an active member of Harrow United Church all his life. Mr. Huffman was a local Lodge member and was presented with a Centennial Award for outstanding Citizenship in 1967.