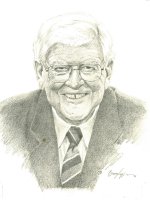 Clayton Switzer, as a professional educator, university administrator and government deputy minister has made enormous contributions to all aspects of agriculture. He has an innate quality of judgment and perspective that encourages closure on difficult issues. He is one of those rare people who translate experience into practice.

Mr. Switzer began his academic career in the Department of Botany at the Ontario Agriculture College after graduating with his BSA, MSA and PhD. He is recognized as an outstanding teacher and researcher of weed science. For many years he chaired the Committee that produced the OMAF Publication 75, Guide to Weed Control. This document continues to be a model for completeness and format throughout North America. He co-authored OMAF Publication 505 Ontario Weeds in 1976, a weed identification guide that has served specialists and farmers for 30 years.

As Dean of the Ontario Agriculture College (1972-1983) he initiated a major review of the research programs and developed a curriculum with greater emphasis on broader issues including the environment, global agriculture and food and one that recognized agriculture as a business. He played a role in helping to develop a modification of the University of Guelph’s strategic plan that resulted in a significant shift in its national and international reputation. He encouraged the transformation of the Ontario Agriculture College into its present form; that of serving all of Ontario in addition to those directly involved in agricultural production. In addition, Clay Switzer mentored a large number of undergraduate students who are scientists and leaders in our modern agri-food industry.

After he retired as Deputy Minister of Agriculture and Food, Mr. Switzer chaired the National Task Force on Farm Finance Committee for Canada Agriculture in the early 1990’s. He played a key role as consensus builder during Federal-Provincial Ministers’ meetings. He improved the working relationships between government and farm organizations. He worked collegially with the Ministry of Environment to assist farmers to understand environmental degradation and to ensure that Ministry staff viewed environmental issues from an agricultural perspective. In addition, he was instrumental in negotiating the unique partnership between industry, the Ontario Ministry of Agriculture and Food and the University of Guelph that resulted in the creation of the Guelph Turfgrass Institute, He then led the fundraising program to build the G.M. Frost Research and Information Centre. He provided leadership in establishing Guelph as a centre of excellence in agriculture and food processing research. In 1986 the Ontario Ministry of Agriculture and Food announced it would establish its headquarters in Guelph.

Among his numerous awards are a Doctor of Laws from Dalhousie University, Honorary Fellow of the University of Guelph, Fellow of the Agricultural Institute of Canada, Fellow of the Weed Science Society of America and a Ford Foundation Visiting Professorship, to name a few, and was inducted into the Canadian Agricultural Hall of Fame. From 1962 to the present Clay Switzer has continued to add value to agriculture and food through numerous industry activities and board memberships. Clay Switzer’s genuine interest in people, loyalty and unselfish passion for the industry has contributed tremendously to the advancement of agriculture over the last half century.