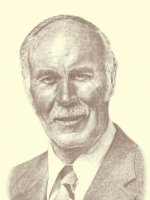 Nominated by: OAC Class of '57

Dr. Ralph Campbell was a successful full time farmer for five years before he enlisted in the RCAF as a pilot during World War II. It was his agricultural background that served his career in Agricultural Economics and Business very well. After graduation from the University of Toronto and completion of a Rhodes Scholarship, he joined the Department of Agricultural Economics at the University of Guelph and served as Head of the Department for ten years. During this tenure, agricultural business management courses were expanded greatly, as were the research initiatives on issues such as farm labour, the impact of vertical integration, the nature of co-operatives, the pros and cons of farm incorporation and the effects of bulk milk handling on farms.

Dr. Campbell was an active participant in the Department's extension programs and he extended the reach of the Department to groups such as bankers, fieldmen and the feed industry for which he developed short courses and conferences around agricultural issues. As a member of the Fluid Milk Formula Pricing Committee established in 1954, he helped to establish a milk pricing formula. He was also a major contributor to two of the most comprehensive studies of agriculture undertaken in Ontario, namely the 1959 Ontario Agricultural Inquiry and the 1969 Federal Task Force on Agriculture. Dr. Campbell, over the course of eleven years at the Ontario Agricultural College and thirteen years at other academic institutions, influenced the careers of hundreds of students, and his lectures were always made interesting by combining economic theory with examples from the real world. In addition to his teaching and extension work, he published numerous articles on agricultural policy issues in the Canadian Journal of Agricultural Economics and the Canadian Economics Journal.

Ralph Campbell served as a President of the Canadian Agricultural Economics Society, President of the Agricultural Institute of Canada and was named a Fellow of each of these organizations in 1980. In 1960, he and six prominent Ontario Agricultural College graduates formed the Ontario Agricultural College Alumni Foundation which has provided a mechanism to fund scholarships to the College and awards to recognize those making significant contributions to agriculture. In addition to his work in Canada, Dr. Campbell undertook three international assignments; with the Ford Foundation to Jordan, 1962-64 and to Kenya, 1970-72 and with the Rockefeller Foundation to Kenya, 1981-84.

Dr. Ralph Campbell's varied career in agricultural economics and business took him through stints as a farmer, a farm community activist, a teacher and student mentor, an active member of key agricultural organizations, a university administrator and an international consultant. The agricultural industry in Ontario, Canada and beyond has benefited greatly from his contribution in each one of these arenas.