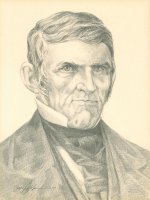 Daniel Massey is truly one of Ontario’s agricultural pioneers. Although born in Vermont, he came to Ontario with his parents in 1802 and worked on his father’s farm until the age of 19 when he started to clear his own tract in Haldimand Township, Northumberland County. From that pioneer farm with homemade furniture, he expanded to clear 1200 acres of land, and developed his interest in labour- saving devices. His first small factory near Newcastle, Ontario, was built in 1847 and turned out plows and small tools. By 1849 he had purchased a small foundry and established the “Newcastle Foundry and Machine Company C.W.”. In 1851 his son, Hart, who took over the enterprise upon his father’s retirement in 1855, joined him in the business.

Daniel Massey was a shrewd, far-sighted and deeply religious man who combined the ideas of other inventors with those of his own to develop machines that would revolutionize the agricultural industry. As Canada’s first farm machinery manufacturer, he sensed the potential of the industry and established standards that have enabled successive generations of his family to achieve both success and fame. His original company merged with A. Harris, Son and Company Limited, and in 1958, Massey- Ferguson Limited.