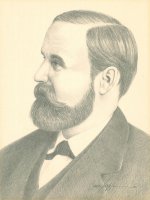 Recognized as the founder of the commercial beekeeping industry in Canada, David A. Jones was producing 70,000 pounds of honey from modern hives in 1880. By 1884, he had 1,000 colonies in several outyards around Beeton in Simcoe County. He was the first person to import bee- breeding stock from the Mediterranean area and to breed them in isolation on Palestine, Cyprus and Jones Islands in Georgian Bay. The resulting selections were shipped to beekeepers around the world. He had many students, some of whom were later to be industry leaders. In 1880 he placed the first honey exhibit at the Canadian National Exhibition and in 1886 he displayed at the Colonial Exhibition in London, England.

His factory made beekeeping supplies, many of his own design, and his printing works published the Canadian Bee Journal in 1885, the local newspaper and the Canadian Poultry World.

A tireless advocate of the honey business, David Allanson Jones was the first president of the Ontario Beekeepers’ Association in 1881 and president of the North American Beekeepers’ Society in 1882. He was village postmaster for 46 years and in 1874 the name was changed from Clarksville to Beeton in recognition of Mr. Jones’ beekeeping endeavours.