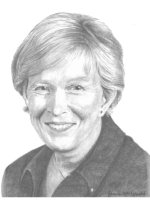 Deborah Whale is a trailblazer and a passionate advocate for the Ontario agricultural sector. Her contributions and commitment in the boardroom and at the podium have made immeasurable improvements in the industry, especially in the animal health sector pertaining to disease control, prevention and emergency preparedness. She was Director and often Chair of over twenty committees and boards, including the Board of Directors of Farm Credit Canada (2004-08); as Co-Chair of the Minister's Advisory Committee for the Canadian Food Inspection Agency (1999-2001); and as Vice Chair of the Ontario Farm Products Marketing Commission (2004-15).

Deborah has always recognized the value of research, and worked tirelessly to ensure that agriculture receives its fair share of provincial and national research budgets. She was the Chair of the Agricultural Research Institute of Ontario; the Chair of the Vaccine and Infectious Disease Organization in Saskatchewan; the Chair of the Investment Committee for Guelph University Alumni Research and Development Inc., Chair of the Research Committee of the Poultry Industry Council; and on the Board of the Poultry Research Centre, University of Alberta. In her role as Chair of the Poultry Industry Council (1999-2006), she lobbied successfully for an Animal Health Act for Ontario, including funding and authority for the Chief Veterinary office in the province. During her tenure as PIC chair, a poultry research team was established at the University of Guelph, collaborative projects with poultry researchers across Canada were funded, and emergency preparedness for disease outbreaks was initiated with the four feather boards.

Deborah was a founding Director of the Ontario Livestock and Poultry Council and chaired the Livestock and Poultry Disease Insurance Committee to develop production insurance for the livestock industry. The OLPC also facilitated important linkages between other industry groups and agencies working on biosecurity initiatives to control and manage livestock and poultry disease. She then extended her biosecurity advocacy to the equine industry through her involvement with the Grand River Agricultural Society and the Grand River Raceway, ensuring that GRAS philanthropic funds were directed to establish an Equine Biosecurity Program through Equine Guelph.

Deborah is Vice-President of Clovermead Farms Inc., a commercial dairy, crop production and biogas business in Wellington County in partnership with her husband Bruce and son Korb. The farm is currently in its seventh generation of continuous production. Since their first Environmental Farm Plan in 1993, they have instituted numerous environmental sustainability initiatives which earned them the Dairy Farmers of Canada Dairy Farm Sustainability Award in 2014 for their extensive efforts in environmental stewardship.

As an agricultural ambassador, Deborah`s impact has been far-reaching. She has spoken to innumerable groups over many years including three Anti-Microbial Resistance conferences on the reduction and control of antibiotics in livestock and poultry; and the One World One Health Conference in Beijing China (2010) on livestock health extension services. She has hosted many farm tours to explain to politicians, foreign visitors and urbanites the immense value of livestock agriculture to Ontario, and in 2010 hosted the Canadian Association of Veterinary Epidemiology and Preventive Medicine planning exercise at Clovermead. She has sat on a wide variety of advisory committees such as the Animal Health Emergency Management Think Tank to prioritize key initiatives for animal disease prevention and preparedness; the Advisory Committee for "Foresight for Canadian Animal Health" for animal health emergency management; and the Advisory Committee on Emergency Management Research priorities for Ontario. She even gave a TedX talk on 'Building a Future for Agriculture in Canada.' Deborah was also given an Honorary Professional Agrologist award in 2011 by the Ontario Institute of Agrologists for her work in finding mentors for new Canadians trained abroad as agrologists.

Deborah Whale`s leadership and vision has greatly benefited Ontario agriculture and she is a deserving candidate for recognition by the Ontario Agricultural Hall of Fame.