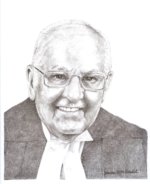 Del O’Brien has solid agricultural and rural roots, raised on a mixed farm near Pembroke, participating successfully in 4-H Achievement Programs, and developing a family dairy operation with a unique 90 stall barn.

After earning his law degree from the University of Toronto, he returned to Renfrew County and established a law firm focused on agriculture. In 1976, after the passage of the Ontario Drainage Act, Mr. O’Brien was asked to establish the Drainage Tribunal which he chaired for the next 14 years. Virtually all of the cropland in Ontario relies on adequate drainage for its productivity.  The effective functioning of the Drainage Tribunal is vital for Ontario cropland as the construction, maintenance and funding of the outlet channels can create technical disputes.

Del began his tenure by holding the hearings in the municipalities where the disputes were to be settled. This improved accessibility for the participants, and as a lawyer, Del could often eliminate the need for legal representation, thus decreasing their costs. The hearings he conducted were known to be efficient and fair, and he saw each case as unique rather than as legal precedent. The result was beneficial to landowners needing to settle drainage disputes and to the municipalities carrying out their duties under the Drainage Act and to Drainage Engineers in the preparation of their reports.

In 1994, Del O’Brien was appointed as Drainage Referee under the Drainage Act and for 12 more years he continued to provide clarity and understanding of the legal requirements of the Act.

He also applied his skills at negotiation when asked by the Federal and Ontario governments in the early 1990s to establish a Tribunal to hear appeals under the new Grape Transition Program. Under this program, Ontario grape growers were assisted to remove their traditional grape varieties and to plant new Vinifera and Hybrid grapes to improve industry competitiveness. It was an extensive and complicated transition process and over two years, Mr. O’Brien conducted nearly 50 hearings without a single appeal being filed.

Del O’Brien has been widely lauded for his legal knowledge, his inherent fairness and for the development of important tribunals marked by stability and integrity making positive impacts on the conduct of Ontario agriculture.