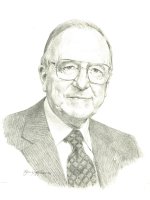 Donald McQueen Shaver started his first hatchery using modern electric incubators at the age of 15 at his parent’s home in Galt (Cambridge). His pen of pullets, in a Canada Laying Test, won the award for best layers of the year. Don’s poultry work was interrupted by military service in WWII but on his return he accumulated a wide range of strains and crossed them. He found heterosis or hybrid vigour could be used in chickens as well as corn. From the crosses he developed the highly successful and world famous leghorn-cross called the Shaver Starcross 288. The product line was expanded into brown eggs, then into meat birds. He started small but recruited distributors across Canada, then the USA and eventually worldwide.

Mr. Shaver acquired Swift’s as a customer in 1952, with a large hatchery in Stratford and international connections in the USA. The first independent hatchery as a franchise, in Mount Joy, PA, began selling in 1958. One of the largest, in Anaheim, CA, began in 1967. Don Shaver sold a large part of his company to Cargill to secure credit for expansion, to expand his international reach and to be guided to new markets, joint ventures, etc. Research and production facilities were built in the USA and France. A subsidiary in the UK was expanded and its research capability increased. In 1967 the first professional geneticist joined the company, followed soon by a veterinarian, more genetics staff, and later technical support staff. Mr. Shaver still relied heavily on consultant nutritionists and veterinarians to travel widely and augment his in-house service. Don Shaver began a beef breeding business based on the same principles applied to poultry. Beef-blend semen, frozen embryos and live animals are currently exported to countries in four continents.

Don Shaver worked tirelessly for industry organizations like the Poultry Products Institute, Canadian Hatchery Federation and others. He imparted a wide variety of experiences to students at the University of Guelph as Entrepreneur-in-Residence, served as fundraising chair for the Advanced Agricultural Leadership Program and chair of the Advisory Council for the Developing Countries Farm Radio Network. He is chair of the Canadian Farm Animal Genetic Resources Foundation, seeking to ensure survival of genetics in threatened breeds and varieties of animals in Canada, in cooperation with The United Nations’ Food and Agriculture Organization. Dr. Shaver served as officer and director on a host of agriculture, business, organization and community groups and has been honoured by many for his untiring efforts on their behalf. He is a Member and Officer of the Order of Canada and a lifelong member of the Kiwanis. Dr. Donald McQueen Shaver has been recognized with two honourary doctoral degrees and inducted into several Halls of Fame. He continues as Honourary Colonel of the Highland Fusiliers of Canada. Don Shaver’s illustrious career in poultry breeding has placed Ontario and Canada in a position of world prominence.