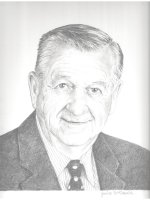 Don Lobb farmed near Clinton in Huron Country for more than 35 years. He was a visionary and motivator to establish and improve soil conservation practices and water quality. He could see by the early 70’s that conventional tillage and planting were leading to soil erosion and the contamination of waterways, including the Great Lakes. So he set out, in collaboration with researchers and extension specialists, to introduce new conservation methods, including no-till, on his farm. He systematically reorganized his fields to decrease soil erosion, planted windbreaks, retired marginal land, worked to slow surface water run-off and rehabilitated stream banks and even a gravel pit. He provided sites for more than 50 major university and government research projects and hosted many conservation education events, welcoming visitors from six continents.

Don’s intensive assessment of conservation practices proved that crop yields and income were not sacrificed by adopting them. As a result he was a much sought after speaker in Ontario, across Canada, the USA and Europe. He was featured in a 1996 documentary called “Water and the Human Spirit” to show how he improved the quality of the water leaving his farm and his farm was a case study in the Senate of Canada “Soil at Risk” report in 1994. He authored, co-authored and edited reports and Best Management Practices for No-Till, Cropland Drainage and Field Crop Production. He continues to work with the Land Improvement Contractors of Ontario to promote the importance of proper soil moisture management.

Don Lobb was a whirlwind of activity and was a founding member of the Soil Conservation Council of Canada 1987 to promote soil conservation practices and decrease soil degradation. He was the co-organizer and Chair of the first Ontario No-Till/Ridge-Till workshop which led to the development of more sustainable farming practices. He established, along with his wife Lillie Ann Morris, the Ontario Soil Champion Award through the Ontario Soil and Crop Improvement Association. In acknowledgement of his hard work to revolutionize thinking around soil management, Don has received a number of awards including being the first national recipient of Agriculture and Agri-Food Canada’s L.B. Thomson Conservation Award, and he was the first Eastern Canada farmer to be inducted into the Canadian Conservation Hall of Fame by the Soil Conservation Council of Canada.

Certainly, Don Lobb’s work on behalf of soil conservation and water quality make him an excellent inductee into the Ontario Agricultural Hall of Fame.