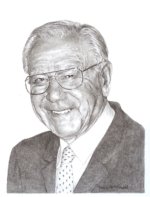 Doug Williams was raised in the Ottawa area on one of the most productive fruit and vegetable farms in Ontario. He went on to join the fruit and vegetable inspection services in Essex and Kent from 1949-52 with responsibility for the Tomato Grading Inspection Station in Leamington. He became the Chief Inspector of Farm Products and, from 1952-63, was the Director of the Inspection Branch. He always took a fair approach to addressing quality standards, believed in strong grower associations, and in listening to and solving growers’ concerns and meeting consumer demands. From 1963-79, he was the Chair of the Ontario Food Council representing primary producers, processors, distributors and consumers. Under his leadership, the Council developed and expanded Canadian and international markets for Ontario produce and Doug went on many trade missions to do this, including the Paris Food Show. He developed a consumer committee to distribute pricing and nutrition information, recipes and the Plentiful Foods Program.

In 1968, Mr. Williams was the Commissioner of Inquiry into questionable marketing practices which culminated in fairer pricing for primary producers. Then in 1979, he began the revitalization of the food show called the “Festival of Food” at the Royal Agricultural Winter Fair in Toronto. At the Festival of Food, Doug and a nutritionist created the first cooking stage at the Royal. This was the birth of Foodland Ontario and Doug’s slogan “Good things grow in Ontario” was copyrighted in 1979 and is still being used today to market Ontario fruit and vegetables. He promoted “Buy Local” and good nutrition, and distributed menu ideas and recipes to Ontario consumers to promote Ontario produce.

Doug became the Chairman of the Ontario Food Terminal from 1979-86. This was a critical time when the future location of the terminal was being debated. His leadership during this period resulted in money for the modernization of the facilities, a large second floor parking area, a covered market and the establishment of the Market Grill.

Doug’s legacy has been far-reaching in the promotion of Ontario produce, the importance of involving all sectors of the industry in change, his respect for the needs of the consumers, and the drive to market effectively, both here and abroad.