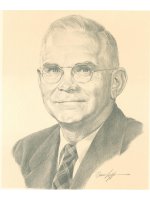 “Doug” Hart was born and raised in Oxford County, and was a 1922 graduate from the Ontario Agricultural College (OAC), Guelph, Ontario in Animal Husbandry. A member of the 1921 Judging Team at Chicago International Livestock Show, he was the top beef cattle judge.

He established Hartholm Farm at Woodstock in 1927 and developed an international reputation with his Holsteins. His cows held a number of Canadian production records. In 1945, he was awarded a Master Breeders’ Shield, the Association’s highest award. A major exporter, he placed 400 herd sires on four continents.

His interests also included a breeder’s herd of Yorkshires qualified under Advanced Registry. The Canadian Seed Growers’ Association honoured him as a Robertson Associate for his work with registered seed grain.

Doug Hart gave of himself to many organizations. He was a past president of the Oxford County Soil and Crop Improvement Association, Oxford Holstein Breeders’ Association and a Director of the Oxford Farmers’ Co- operative. He was an outstanding journalist, writing “With The Dairyman” column in the Canadian Countryman and the Farmers’ Advocate for 30 years. He lectured extensively across the Province.

Ontario farmers knew Doug Hart as a good farmer, a dedicated leader, a gifted writer, and a spirited debater whose influence on the industry is beyond measurement.