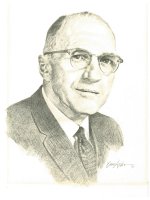 The Glenvue name has long been associated with excellent Holstein cattle.

Douglas Dunton founded his herd in 1928 and guided its development, with an eye to changing industry demands, for over 40 years. Breeding for true type conformation, heavy production and outstanding seed stock value was the recipe Douglas Dunton perfected. His success was acknowledged at the Royal Agricultural Winter Fair and the Canadian National Exhibition where many of his cattle earned show champion status. Some of Dunton’s All Canadians and All Americans have gone on to become the foundation of top Holstein herds around the world.

As a member of the Selective Registration Committee and an official classifier, Dunton actively contributed to Canada’s international reputation for excellence in the dairy industry. Dunton’s association with producer organizations began in the 1930s when he was a member and later President of the South Peel Milk Producers’ Association. In 1942 he became President of the Peel Holstein Club and as a 15-year board member was elected President of the Canadian Holstein-Friesian Association in 1962. Mr. Dunton was awarded an unprecedented two Master Breeder Shields, one recognizing his work and the other that of his partnership with his sons.

Locally, Douglas Dunton was a community leader. He served Peel County as both a public and high school board of education trustee. For more than twenty years he was active in the affairs of the Peel Mutual Insurance Company including a term as President. He was Deputy Reeve and Reeve of Toronto Township, and in 1950 was appointed Warden of Peel County. Douglas Dunton has been honoured with certificates, awards and diplomas in recognition of his abilities and contributions to agriculture and his community.