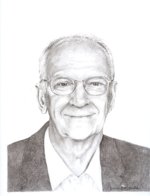 Dr. Terry O’Connor operated a successful veterinary practice with his brother Denis in Stouffville for over 25 years, establishing firm credentials as a caring and capable veterinarian.

He then became the Ontario Ministry of Agriculture and Food’s Regional Veterinarian and Program Manager for Livestock Regulatory Programs from 1985-97.  It was during this period, that he made substantial contributions to Ontario’s beef and swine industries. He oversaw the operations of the Beef Cattle Financial Protection Plan to assure producer payments and to protect the income of farmers through the sale and payment process.

He also played a significant role in the emerging field of animal welfare to determine which animals could be transported humanely, resulting in the development of the Ontario downer policy. Terry was also at the forefront of animal welfare issues at the stockyards and sales barns to develop acceptable levels of care and euthanasia of animals in distress. He was driven by the importance of developing standards of animal care and a positive image for the beef industry.

Dr. O’Connor also played a key role in developing safe deadstock disposal alternatives for the swine industry.  In 1995, research findings from the University of Guelph, Ridgetown; into deadstock composting in burial pits were published. Terry’s work on this important research, along with OMAFRA engineer Frank Kains, led to Ontario passing a regulation to approve of this low cost but biosecure deadstock disposal method.

Another area in which Terry made a major contribution was in his work bridging the rural/urban divide. These included his years on the Markham Fair Board where he was integral in the establishment of Old MacDonald’s Farm. This unique display connects urbanites to livestock agriculture. Terry also created the  ‘Markham Pizza Project’ that educated school children about the production of pizza ingredients. From 1998 to 2019, he developed “Growing Projects” through the York Soil and Crop Association to sell the crops to support the Canadian Foodgrains Bank. These projects have already raised over $2 million in York Region that was matched 4:1 by the federal government.

Through the Toronto and Region Conservation Authority (2003-6), he helped to produce the Rouge River Watershed Plan, and during his tenure on the York Region Federation of Agriculture (1998-2019), important work was done on the Rouge Park farmer-tenant consultations and bylaws relevant to trees and hunting while protecting agriculture in the “Green Space” plan.

Dr. Terry O’Connor made a significant impact on many sectors of Ontario agriculture and the environment as well as diminishing the rural/urban divide.