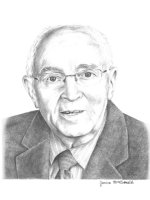 Many years before global climate change was generally acknowledged, Dr. Murray Brown began his research on the effects of climate change on Ontario cropping systems. This research fostered the development of several innovative approaches with cropping to ensure long term sustainability. While Murray was at the Ontario Research Foundation from 1953-65, he developed the Corn Heat Unit (CHU) system for predicting the phonological development and response of various crops to thermal time. This led to more precise matching of hybrids to growing conditions, so that Ontario has become a leading corn and soybean producing area. The system was first used in 1964 and is still used today with an impact reaching across perhaps 200 million acres and 100,000 Canadian farmers over half a century. That is known as a major positive impact on agriculture!

Once Dr. Brown began his career at the University of Guelph from 1966-93, he and his students developed a number of crop models to predict yield potential, water use and crop quality for crops such as forages and potatoes. He developed a mathematical means for estimating the number of days available for planting and harvesting during the critical spring and fall periods, so that farmers were able to calculate the size and use of equipment needed to optimize success. This then led to better timing of crop treatments as well as to the improved ability to forecast yield potential for crops like corn, soybeans and potatoes. Murray also used models to research climate variability and potential damage to tender fruits such as peaches and grapes.

He and his students went on to develop more complex models of crop response to environmental variables involving forecasting soil moisture, the proportioning of photosynthate to tops and roots, transpiration and other factors to provide information which farmers could apply for optimal crop production.

As a meteorologist, Murray Brown made many more far-reaching contributions to sustainable agriculture through his participation in a number of organizations. He was the President of the Ontario Institute of Agrology in the early 1970’s and was also the Chair of the Ontario Agrometeorology Research Committee from 1980-84 when he led the formation of the Ontario Weather Services Committee to improve weather services for agriculture in Ontario. Through his efforts, the Canadian Society of Agriculture and Forest Meteorology was formed in 1986 with Murray as the first President. He chaired the Working Group on the Effects of Climate Variability on Agriculture under the World Meteorological Organization from 1983-86. In recognition of his tremendous contributions to agriculture and meteorology, he was made a Fellow of the Canadian Society of Meterologists in 1994.

Dr. Brown continued his work long into his retirement and in 2013 he co-authored a paper with OAC Dean Robert Gordon, titled “Temporal and Spatial Variability of Water Surplus in Ontario”. We proudly induct Dr. Murray Brown into the Ontario Agricultural Hall of Fame.