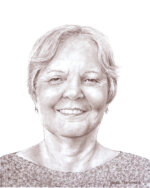 Nominated by: Dr. Harry Brightwell and the Rotary Club of Stratford

Dr. Patricia Shewen (BSc DVM, MSc, PhD) was a professor at the Ontario Veterinary College, University of Guelph from 1982- 2011. She was also the first female Assistant Dean of Research and Graduate Affairs, the inaugural chair of the Department of Pathobiology and is currently the associate editor of the Canadian Journal of Veterinary Research. She served on the boards of many professional associations, including two terms as a member of the Governing Council of the National Research Council, Canada's largest federal research and development organization.

In 1988, after more than ten years of research and trials, Pat and colleague Dr. Bruce Wilkie, developed a vaccine to control bovine pneumonic pasteurellosis or 'shipping fever'. Caused by Pasteurella (Mannheimia) haemolytica, a bacterium which can enter cattle lungs when the animals are stressed, shipping fever was responsible for losses of hundreds of millions of dollars to the North American cattle industry. The vaccine not only addressed these losses but also led to substantial reduction in the use of antibiotics in cattle.

The vaccine developed by Drs. Shewen and Wilkie was called 'Presponse' and was the first effective vaccine against the most common bacterial agent in bovine pneumonia. The vaccine production process they pioneered was the exact opposite of what had been done for half a century.  They recognized the importance of utilizing the culture fluid in which the bacteria were growing, as this contained a leukotoxin that was critical in causing pneumonia. Their discovery of the role of leukotoxin also led to an outpouring of additional research by other groups, including 300 scientific papers investigating leukotoxin and new ways to induce anti-bacterial immunity.  Commercialization of the vaccine earned the University of Guelph more revenue than any other patented discovery.

Dr. Shewen went on to publish or co-publish over 100 additional research papers in ruminant immunology dealing with such issues as chlamydial infection, the components of neo-natal immune defenses and the development of an edible vaccine using transgenic alfalfa.

Such is the dominance of Pat Shewen's knowledge in this field, that she has been dubbed 'Pasteurella Pat'.

In addition to her very successful research career, she is well known for her thoughtful mentoring of graduate students and the young veterinary students at OVC. Many students consistently cite their sincere appreciation for both her scientific guidance and her ability to motivate and encourage.  She taught immunology to DVM students for more than 25 years and was the principal advisor for over 30 graduate students and post docs, who now hold prominent positions in government agencies, universities, and the animal health industry.

Dr. Patricia Shewen is indeed an impressive inductee into the Ontario Agricultural Hall of Fame.