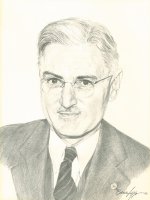 For 40 years, Frank Palmer was the Director of the Horticultural Experiment Station at Vineland Station, Ontario and for 12 of those years he was Head of the Department of Horticulture, Ontario Agricultural College in Guelph.

He became world renowned as a plant breeder and experimental station administrator. He played a major role in the development of the “V” peaches and new cultivars of sweet cherries, raspberries, grapes, vegetables and flowers. Dr. Palmer created some 80 cultivars of gladioli and his 1931 introduction, Picardy, was considered the finest cultivar introduced to that date. His work with other ornamentals such as rhododendron brought many new garden plants to Ontario.

Dr. Palmer’s work has been widely recognized. He was named a Fellow of the Agricultural Institute of Canada, of the American Association for the Advancement of Science, and of the Royal Horticultural Society (England). He received an Honourary Doctorate in 1948 from the University of Toronto and in 1956 was awarded the Wilder Medal by the American Pomological Society for “outstanding service to agriculture.”