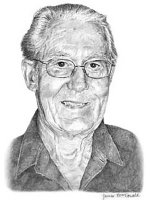 Dr. Emil T. Andersen has an international reputation as one of the leading horticultural scientist in North America. Interestingly, most of his secondary school education was done by correspondence from the family homestead near Drumheller, Alberta. Yet, his outstanding marks led to scholarships at both the Olds Agricultural School and the University of Alberta.

Emil Andersen's career in horticulture began at the Horticultural Research Station at Brooks, Alberta, followed by a two-year fruits and vegetable research program at the Lethbridge Experiment Station. At this time, the University of Manitoba hired him to head the horticulture teaching and research position in Manitoba. The Manota potato variety came out of this program: a very high-quality potato that is still being grown in western Canada.

Emil Andersen completed his PhD on 1962 at the University of Minnesota end stayed on to carry out research and teach fruit culture and pomology Research included various fruit crops involving both small and tree fruit breeding and culture. Apple breeding rootstocks and culture were prominent. Hardiness, nutrition and weed control were important aspects. He introduced two new apple cultivars, Regent end Red Baron and proposed the crosses that produced the new Honeycrisp variety.

In 1967, Or. Andersen moved to the Horticultural Research Institute of Ontario in Vineland and became the Chief Research Scientist. During his tenure there, he was responsible for several important outcomes including new peach and grape varieties, trickle Irrigation procedures, and the construction of state of the art greenhouses to support floriculture and vegetable research.

He also supervised the construction of a controlled atmosphere cold storage research facility to improve the storage of fruits, vegetables, floriculture, and nursery plants. Emil Andersen has made numerous other research contributions that advanced horticulture including his mentorship of students and growers, as well as the development of the Millennium Forest on the grounds of Guelph University's Vineland Campus. Dr. Emil T. Andersen is an outstanding example of the impact of dedicated research on the development of a diverse horticulture industry, which has grown to become a very important and successful sector in Ontario agriculture.