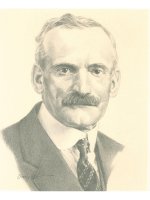 Of United Empire Loyalist stock, Erland Lee had a reputation as a good farmer, with a keen interest in the welfare of his fellow man. On the Lee farm he raised Jersey cattle, was one of the first to grow grapes commercially, and he shipped carloads of Rode Island Greening apples from his orchards to the British market. He was one of the first maple producers in the area to use an evaporator.

He served many organizations: secretary of his local Farmer’s Institute for 19 years, Township Clerk for 20 years, first president of the Wentworth Seed Fair, president of the Wentworth Agriculture Board, and secretary- treasurer of the Saltfleet Agricultural Society. But it was his work with Mrs. Adelaide Hunter Hoodless to found the first Women’s Institute in the world that gained him most acclaim. The organization was his idea originally and he convinced Mrs. Hoodless of its merit. He then proceeded to develop the Constitution and Bylaws and carried out the necessary negotiations with the Minister of Agriculture to secure the Charter.

The Erland Lee (Museum) Home is now an historic site at Stoney Creek, preserved and maintained by the Federated Women’s Institutes of Ontario in memory of its co-founder, Erland Lee.