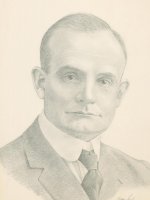 Nominated by: County of Simcoe

Born in Simcoe County and known as the “Farmer Premier”, E. C. Drury followed in his father’s footsteps as a progressive force in Ontario’s agricultural development. A proponent of agricultural associations and co-operation, he was the leading force in many organizations advocating farmers’ rights, agricultural education and practical farming.

A strong advocate of reforestation and forest management, Mr. Drury was instrumental in the appointment of the first Provincial Forester, the establishment of tree nurseries in Midhurst and Angus and the reforestation of wasteland. He operated a typical mixed farm with purebred Shropshire sheep and Dual Purpose Shorthorn cattle in Oro Township.