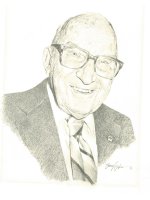 Frank Parry has been a booster of Kent County and Ontario agriculture all his life. As a farmer he saw the need for organized farm marketing and research and as an individual he recognized the importance of community involvement to achieve those ends.

Born in Dover Township, Kent County and educated in local schools, Mr. Parry entered farming specializing in the production of sugar beets and vegetables. Realizing the importance of marketing, he became involved in the Ontario Vegetable Growers’ Marketing Board serving as Chairman in 1965. His negotiating skills were a major asset to the organization and it was said, “his diplomacy and good nature were a major factor in the establishment of better relationships between vegetable growers and processors”. The same skills helped him secure new markets for Ontario vegetables during his tenure as Chairman of the Fruit and Vegetable Export Promotion Council and served in his work with the Burley Tobacco, White Bean and Sugar Beet Marketing Boards. Frank also recognized the importance of research in improving agriculture. He collaborated with Ridgetown College of Agricultural Technology and the University of Guelph in practical research projects. Crop Insurance, protecting Ontario farmers against the perils of crop losses caused by adverse weather and pests, was another of Mr. Parry’s interests. He promoted a crop insurance plan for processing peas and for many years served as an advisor to the Ontario Crop Insurance Commission.

Community involvement was also a priority for Mr. Parry. An active member of the Jaycees, the Masons, the Lung Association, his church and the Chamber of Commerce, Frank Parry helped bring agricultural interests to the forefront of his community. For his leadership, municipal, provincial and federal organizations and governments have honoured Frank. His many awards and citations include induction into the Kent County Agricultural Hall of Fame, being awarded an Ontario Ministry of Agriculture and Food Centennial Award, the Queen’s Jubilee Award and being honoured by the Canadian Agricultural Congress.