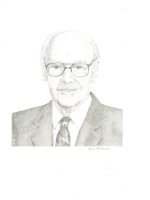 The story of Frank Archibald is the story of leadership, whether on behalf of agriculture or his community or during World War II when he earned the Military Cross for bravery. He is known as a man who is generous with his time and his funds, and can always be counted on to get things done efficiently and effectively.

Frank Archibald managed feed, fertilizer and grain businesses in Essex, Kent, Lambton, Middlesex and Elgin Counties. He was someone whom farmers liked to do business and he consistently pursued innovation and modernization in the businesses to provide better service and better prices for his customers. He advised farmers about the latest in animal and poultry management and nutrition. He upgraded elevator facilities with increased storage, drying, shipping and receiving capacity for the corn, soybean and wheat producers. He organized growing and contracting seed com production under the Asgrow brand, offering farmers more choice in their seed corn purchases.

ln 1953, Frank was instrumental in bringing anhydrous ammonia into Southwestern Ontario as an economical source of nitrogen for corn. His leadership allowed Toronto Elevators to expand into grain handling and exporting, thereby facilitating the development or overseas markets for Ontario specialty crops. Ho opened a grain storage terminal in Wallaceburg for loading ships with Ontario crops. Edible soybeans ere shipped to Japan and specialty com was shipped to such companies as Kellogg’s and National Starch. He added blending facilities to several or his retail outlets so that fertilizer could be blended to match soli and crop requirements.

He has been active in a variety of charitable organizations for many years such as the Chatham United Way, the Chatham YMCA, Kinsmen and Rotary Clubs. He was supported in all of his endeavours by his beloved wife Florence who died in 2002.

Frank Archibald's contributions to agriculture, to farmers and to community make him a most worthy inductee into the Ontario Agricultural Hall of Fame.