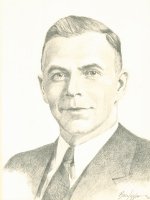 Nominated by: The George Jackson Family

George C. Jackson was a role model for dairy farmers. From a modest beginning, he established one of Canada’s premier Holstein herds and led the way in establishing an orderly milk marketing system.

Born on a third-generation farm near Elia, York County, George was educated locally and served as a volunteer with the Canadian Expeditionary Forces during World War I. In 1923 he established Lonelm farm near Downsview.

From the beginning, George purchased the best purebred cattle he could afford and through careful breeding and selection, combined with meticulous management, build a herd that had “more impact on the Holstein breed in that era than any other”. In recognition of its excellence, Lonelm was the fifth herd in Canada to be awarded the prestigious Master Breeder award in 1938.

Following his example, many local farmers established herds of purebred Holsteins and started shipping whole milk, thereby improving their income through the sale of milk and breeding stock. George also gave generously of his time to the many individuals and group tours that visited Lonelm to study his methods.

In his devotion to the breed and to the industry, George served as a member and President of the York County Holstein Club and the Holstein-Friesian Association of Canada (1943). As a recognized leader in the farm community George had a keen interest in milk marketing.

A skilled mechanic, George’s farm workshop provided a community repair service and his interest in better farming practices led to a sideline as a tile drainage installer. George also served his community with the Masons and as a trustee and Chairman of the local school board.

Tragically, George Jackson died in a farm accident in 1956 but his Lonelm legacy continues to enrich the Ontario dairy industry.