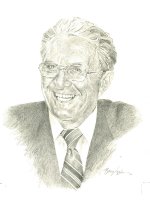 George Edwin Jones, World War II Veteran, academic, professor, scientist, research director, extension worker, public speaker, innovative thinker and visionary. His colleagues have referred him to as “The Man Who Changed the Way Ontario Farms”. The achievements of George, during his dynamic career, are legendary.

More than any other person, George was responsible for expanding the acreage of grain corn across Ontario and into other provinces. During the period from 1950 to 1970, the acreage of grain corn increased in Ontario by nearly 10-fold, from 225,000 to 2,000,000 acres, and corn became the dominant feed grain for both the cattle and hog industries. He aggressively promoted the production of corn in shorter-growing-season parts of Ontario. George was secretary of the Ontario Corn Committee from 1955 to 1971. This was a time of major change within that organization, a time when corn hybrid recommendations became based solely on scientific data and not personal opinion. He was an early advocate for what might now be called “holistic” agriculture. He saw the advantages in, and actively promoted, the integration of livestock and corn production with livestock producing the fertilizer to “feed” the corn crop, and the corn crop feeding the livestock. He focused on weed control in corn with dramatic results.

Along with his colleagues, they worked with the industry to make sure that all potential herbicide products were exploited for what they could do for farming in this Province. It is said that Ontario became a global leader in chemical weed control in corn, due in large measure to the inspiration of George Jones. George was also instrumental in getting a soybean breeding program started at the Ontario Agricultural College. In addition, he was one of the early pioneers to identity the energy savings and the conservation advantages of minimum and zero till systems for growing corn and soybeans. These tillage systems are widely used today.

As a public speaker, he was sought after across Canada and into the Eastern United States. During his career, he spoke at hundreds of farm meetings. Farmers flocked to hear “Corn Jones” as he was affectionately known. County branches of the Ontario Soil and Crop Improvement Association featured George as their keynote speaker on many occasions. His thought-provoking speeches, whether to students or the leading farmers, contained the nuggets of information intended to assist them with making better decisions. George Jones was presented with the Agricultural Institute of Canada’s highest award “Fellow of the Agricultural Institute of Canada”, and is a Life Member of the Canadian Seed Growers Association. George Jones’ vision for sustainable systems in agriculture and his leadership in crop protection and its integration with livestock production brought incredible changes to crops and livestock programs in Ontario.