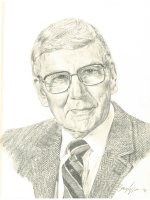 Considered by many to be the dean of farm radio broadcasting, George Atkins is recognized around the world for excellence in agricultural communication. From his early work as farm manager at Woodlands Orchards Limited in Trafalgar Township, Halton County and organizer and member of rural youth and agricultural organizations, he demonstrated dedication to the widespread adoption of innovative farming techniques.

George Atkins' career as a farm broadcaster saw him progress from being a Junior Farmer panelist on National Farm Radio Forum broadcasts to becoming the host and voice of agriculture on the CBC's early television programs "Countrytime" and “Country Calendar”. It was in his preferred medium of radio communication, however, that he gained international recognition. New and innovative programming techniques and timely information and advice became his trademark. The highly successful "Radio Noon” program was a stepping stone into international agricultural communications, culminating in his founding of the Developing Countries Farm Radio Network (DCFRN), an organization that links together farm broadcasters and other rural communicators in more than 100 countries around the world.

George Atkins is an educator, consultant and communicator recognized for his ability to gather, analyze and interpret agricultural information essential to both the farmer and the general public. A long list of honours and awards attest to the admiration he has won from aspiring farmers and international statesmen alike. It is in his service to agriculture and the environment, however, that George Atkins is recognized around the world.

In recognition of his outstanding service, he was conferred an Honourary Doctor of Laws degree by the University of Guelph, appointed Member of the Order of Canada and was named 75th Anniversary Paul Harris Fellow by Rotary International.