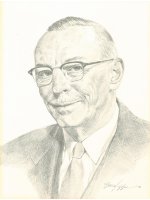 Teacher, scientist and ardent conservationist, Gerald Ruhnke, born in Kent County, became an international leader in soil science research and devoted himself to helping farmers utilize their soil resources conscientiously. A graduate of the Ontario Agricultural College, Guelph, in 1923, he immediately joined the Department of Chemistry and became involved with the Soil Survey Program in Ontario. Appointed Head of the Department in 1936, Ruhnke was instrumental in formalizing an agreement between the federal and provincial governments, which led to the co-operative soil survey programs which exist today.

Ruhnke’s outstanding contribution to the theory and practice of soil conservation can also be seen in his work with the Soil and Crop Improvement Association and the Fertilizer Advisory Board of Ontario.