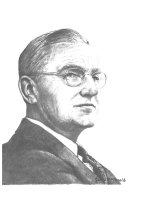 As a very young man, Gordon Leitch headed west from Ridgetown, Ontario to gain experience in the grain business, working for the Manitoba Wheat Pool as a salesman. After twelve years at the Wheat Pool, he was promoted as manager of the Toronto branch of the Canadian Wheat Pool (CWP) and became aware of what he saw as needless transportation costs in the supply of western grain to the flour and feed mills of Ontario.

When the CWP rejected his idea of building an elevator on the Toronto waterfront to handle western grain, he raised the required capital through friends and other investors, to build the first elevator on the Toronto waterfront known as the Toronto Elevator. Gordon became the General Manager of the elevator which served as a storage facility and feeder plant for mills and processors across Ontario and served to facilitate the movement of western grain to eastern Canada. This ultimately grew into what is now known as Masterfeeds Inc. When World War II produced a need for oil, Leitch accommodated this demand by purchasing an oil extractor and developed a sizable vegetable oil business too.

To further reduce costs of western grains, Gordon raised the capital to establish the Northland Steamship Company with one original ship, and in 1932 he established the Upper Lakes and St. Lawrence Transport Company Ltd. with two ships. He served as the President and Manager and his financial partner was James Norris of the Norris Grain Company of Chicago. In 1936, Leitch built the Three Rivers Elevator on the St. Lawrence River and by 1937 his shipping business was one of the largest on the Great Lakes. In 1952, he purchased St Clair Grain and Feeds Ltd. in Kent County, and in 1954, the year of his death, he purchased the Goderich Grain Elevator. After his death, his son assumed control of the businesses.

Gordon Leitch’s contributions to Ontario agriculture are very significant, as they established the logistics network used today by Ontario and Canadian farmers to facilitate the grain trade across Canada and the world. He created a complete grain handling system that supported the growth of Ontario farms and made Canada a recognized world leader in global agriculture.

The legacy of Gordon Leitch’s vision lives on in the feed supply industry in Ontario, making him a most impressive inductee into the Ontario Agricultural Hall of Fame.