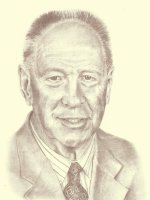 Gordon Bell is unique in that he has made major contributions to two key agricultural sectors in Ontario: Holstein cattle and Standardbred horse breeding and racing. From 1956 to 1985, Gordon Bell worked for Holstein Canada where he provided the leadership and knowledge of pedigrees, type and production to enhance the Holstein breeding programs in Canada and the United States. He served on the Sire Selection Committee to select the top bulls and developed, with Ross Butler, the first True Type Model Holstein cow and bull. He conducted judging schools throughout Ontario and beyond to train judges for local, provincial, national and international shows. In 1968 he selected 400 bred Holstein heifers by eye for export to England. He promoted the international sale of Canadian Holstein bulls and semen for Semex, and he selected a show herd of Canadian Holsteins to be exhibited in France and another for Yugoslavia. All of these activities promoted international interest in Canadian Holsteins and led the way to a flourishing trade in Canadian dairy cattle. Mr. Bell also helped to organize the 4-H calf sale and the Shore's Classic Sale and the subsequent availably of top 4-H calves helped to strengthen the 4-H dairy program across Ontario.

Gordon was the first person to allow a Red and White Holstein to show at a championship show, thus paving the way for the growth of the Red and White Show at the Royal Winter Fair and the subsequent sales of these cattle to several other countries. All the while, Gordon Bell was successfully breeding, training and racing Standardbred horses. In 1972, he was one of the Founding Members of the Ontario Sires Stake Committee to promote the importation of good stallions from the United States and to initiate the Sire Stakes Racing Series. This all led to the improved quality or the racing stock, more competitive racing, increased winning purses and the exponential growth or the racing industry in Ontario.

Commercial breeding farms were established; more race tracks were built; many jobs were created and breeding stock from Ontario is highly sought after in Europe, Australia and South America. The Ontario Sire Program is recognized by owners as the best in North America. Gordon Bell has been rightly praised as a man of vision, a man of integrity, and a man who gets things done.