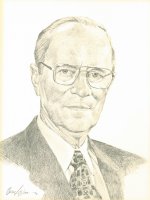 Perhaps one of the most famous farmers of his generation, Gordon Hill recognized the power of collective organizations to realize the needs of Ontario agriculture.

For over twenty years as a farmer and an elected representative of the Ontario farming community, Gordon Hill articulated the needs of his generation.

Born in Tuckersmith Township, Huron County, Gordon attended S.S. #3 and Clinton District High School. He started farming with 60 acres of rented land and over the years in partnership with his son, Beverly, expanded the operation to form a highly successful and diversified farming operation including 2,000 acres of cash crops, hogs, chickens and a mill operation. Gordon’s diverse farming experience was reflected in his participation with many different farm marketing organizations. At various times he was actively involved with Ontario Hog Producers’ Marketing Board, the Chicken Marketing Board, the Ontario Farm Products Marketing Board, and the National Farm Products Marketing Council.

An avid fisherman who belonged to the Bayfield Anglers Association, Gordon was also active in his community, serving as a member of the Stanley Township 150th Anniversary Committee and as steward with the Varna United Church.