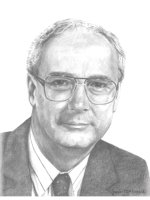 Graeme Hedley began his working career as a Livestock Specialist with the Ontario Ministry of Agriculture in the 1960s and was a well-respected advisor in the beef, swine and sheep sectors. Then in 1970, he became the Executive Director of the Ontario Cattlemen’s Association (OCA) (now known as Beef Farmers of Ontario). Over the next 31 years at OCA, he honed his expertise in the complexities of the modern cattle industry, including nutrition, genetics, animal health, marketing and policy.

During his tenure at OCA, the beef industry underwent immense change and challenge, gradually moving from a commodity approach when selling product to a food-based approach marketing the nutritional quality of beef. As market analyses developed, Graeme and OCA promoted an improved rural/urban interface in discussions about animal welfare and environmental safety related to animal production. This ultimately led to the establishment of the Ontario Farm Animal Council (OFAC) which championed responsible animal care.

Mr. Hedley also developed a pilot project to show proof-of-concept for electronic sales of beef cattle. Ultimately, the Ontario Livestock Exchange (OLEX) bought the concept, grew the process and expanded it globally. Thanks to Graeme’s leadership, these electronic sales have greatly improved animal welfare, eliminating the need to transport cattle to and from auction markets.

Beginning in the late 1980s, cattle producers were faced with very high interest rates and growing debt levels. Under Graeme’s guidance, the OCA established trained teams to work with producers and the banks, which resulted in the development of the Feeder Finance initiative. He was also recognized as an excellent agricultural policy analyst, able to analyse current conditions and provide the leadership to define policies and programs to counter sector challenges. Two of his major initiatives had important positive impacts on the beef industry and agriculture in general.

Graeme Hedley led the move to divest the Ontario Stockyards from government ownership through the Toronto Stockyards Land Development Fund. The result has been the provision of millions of dollars to Ontario livestock organizations, enabling them to invest in the continued advancement of Ontario livestock agriculture through genetic improvement, and through other research projects designed to keep the agriculture industry on the leading edge.

He also assisted the Ontario Cattle Feeders’ Association to become established to successfully market and brand Ontario Corn Fed Beef. This Association markets more than half the fed cattle in Ontario and continues to grow its markets in North America and internationally. The OCFA also administers the Ledger Account program developed by Graeme and the feedlot operators to establish a business risk management tool for the operators.

Graeme continues his work as Chair of the Canadian Beef Grading Agency (1999-present) which establishes a national grading system to promote marketing and production decisions. He also has served as the Secretary of the Ontario Agricultural Commodity Council (OACC), which is a coalition of 31 commodity organizations formulating common positions on farm business risk management programs and coordinating the investment of research funding.

Clearly, Graeme Walker Hedley is an exemplary addition to the Ontario Agricultural Hall of Fame.