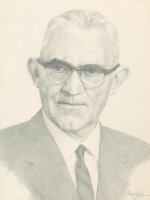 Born in Middlesex County, Hardy Shore devoted his lifetime to breed improvement and the promotion of Holstein cattle.

Mr. Shore was a director of the Holstein Association of Canada for fifteen years and served as its President in 1967. While on this Board he was instrumental in the campaign to register red and white Holsteins. Hardy Shore bred and developed several All-Canadian Holsteins and was awarded the prestigious and highest Holstein Association Award – the Master Breeders Shield. He successfully exhibited cattle at major shows throughout Canada and the United States.

Hardy was active as a Holstein judge, judging in Australia, United States and across Canada. In 1949, he founded Shore Holsteins Limited, a management and export organization selling cattle to over forty countries.

Throughout his career, Hardy Shore was active in community organizations as Township Councillor, Church Warden and Historical Society member. He served as a Director of the Royal Agricultural Winter Fair and President of Western Fair Association, 1971 – 1972.

In recognition of his outstanding service to agriculture, Hardy Shore was awarded the OAC Centennial medal in 1974.