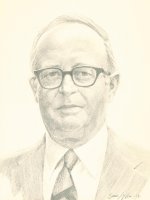 Ontario’s tender fruit industry owes much to the leadership of Harold Smith. His foresight into consumer acceptance of a red peach led him from experimenting with, to planting one of the first commercial orchards of Ontario’s most popular peach, the Red Haven. Harold Smith’s work with cherries revolutionized the industry. In addition to being a pioneer in mechanical harvesting he built a processing plant for sour cherries and in 1964 established his own brining operation for sweet cherries.

As a representative of the province’s fruit and vegetable producers, Harold Smith worked with the government for the advancement of the industry. He played a lead role in the development of integrated pest control and initiated the implementation of Ontario’s off-shore labour program.

A businessman, Harold Smith operated 700 acres of tender fruit. He was a Director of the Vineland Grower’s Co-op and the Ontario Tender Fruit Marketing Board. His membership in the Ontario Food Processors’ Association spanned three decades. Harold Smith served his community of Vineland as a Trustee of the United Church and Public School. He had the honour of being a Governor of Brock University from 1965 – 1969.