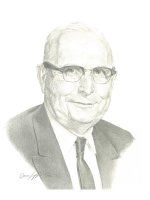 Nominated by: Ontario Milk Marketing Board

More than any other man, Hector Arnold of Campbellford, Ontario, marshalled the cheese-milk producers of Ontario into a strong coherent group and championed a unique and successful marketing system for its product.

Born in Seymour Township, Northumberland County, on the farm of his Scottish father, Hector Arnold made an early mark as a professional dairyman. In 1931, he won first prize for the most butterfat per acre in the province. In1932, he was elected president of his local Crowe Bay Cheese Factory, a position he held for 32 years. Successfully he served as President, Northumberland County Cheese Producers (1942 -1965), Chairman, Campbellford Cheese Board, and in 1942 he became a Director of the Ontario Cheese Producers’ Marketing Board moving up to the presidency from 1955 to 1965. He retired only when the Cheese Board was disbanded and merged with the Ontario Milk Marketing Board. He a so served for a time as Vice-President the Ontario Federation of Agriculture.

Declaring that Ontario cheddar was the best in the world, Hector Arnold personally travelled to Britain on a number of occasions to expand export markets.

The quality of Ontario cheese and the successful record of its marketing system are memorials to the dedication and enthusiasm of Hector Arnold.