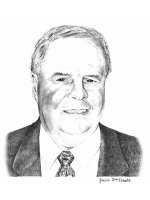 Hector Delanghe began his career in 1961, steadily expanding to 400 acres, growing up to 20 different crops and an on-farm market. In 1988, Hector was awarded the Uniroyal Golden Apple award as Outstanding Grower of the Year. In 1989, he was given the Ontario Fruit and Vegetable Growers Association (OF&VGA) Award of Merit. In 1992, he received the Canadian Society of Horticultural Science Outstanding Individual Award. In 2002, Hector was inducted into the Chatham-Kent Agricultural Hall of Fame. And in 2009 he was honoured with the Kent Federation of Agriculture Meritorious Service Award as well as the OF&VGA’s Life Time Achievement award.

But his leadership and vision extended even further, as he became instrumental in solving the issues of labour requirements for Ontario farmers, in developing employment standards, and in extending Crop Insurance and Safety Net Programs.

Hector Delanghe was key in the development of the Temporary Foreign Workers Program in the 1960’s which brought workers from Jamaica and Mexico into Ontario under the Seasonal Agricultural Workers Program (SAWP) segment of the TFWP. As Chair of the Labour section of the OFVGA, he was responsible for the development of FARMS…Foreign Agricultural Resources Management Services which represents a range of horticultural commodity organizations and coordinates the processing of requests for foreign, seasonal agricultural workers. As Chair of FARMS, Hector negotiated all aspects of the SAWP contracts, except for wage levels, on behalf of the Federal Government. He then became the Chair of CanAg Travel which arranges the international travel of seasonal agricultural workers.

Hector was also one of the driving forces behind the development of the Labour Issues Coordinating Committee (LICC) in 1991, and through this organization, he was successful in convincing the government that the seasonal and perishable nature of farming warranted its continued exclusion from the Labour Relations Act. The United Food and Commercial Workers International Union (UFCW) took the exemption to the Supreme Court, with Hector Delanghe receiving intervener status to represent farm employer perspectives. Ultimately, the Agricultural Employees Protection Act was created in 2002 to be a cooperative approach to finding the balance of power between workers and their employers. As Chair of the LICC, Hector went on to represent employers’ perspectives in a number of high profile cases involving the UFCW and finally in 2011, the Supreme Court ruled in favour of LICC so that farmers did not have to operate under a collective bargaining regime mirroring the Labour Relations Act. Hector coordinated the development of a manual for farm employers entitled “Employee Relations Best Practices: A Handbook for Ontario Farmers”. Then he led the consultations which developed the Farming Operations Regulation which outlines guidelines in eight key areas of farming to explain how to comply with the Agricultural Employees Protection Act. As a member of the LICC Executive, Hector was instrumental in protecting the industry from challenges under Regulation 285 of the Employment Standards Act, and under Hector’s leadership, LICC has consulted on Farm Safety, Workplace Safety insurance premium rates, the Agricultural Workwell Audit and the Vulnerable Workers Advisory Committee. LICC has gone on to develop a communications policy as a means of managing the manipulation of the media by the UFCW pertaining to offshore farm workers.

Hector Delanghe sat on the Crop Insurance Commission for 15 formative years, and for a decade served as the Horticulture Representative on the NISA (Net Income Stabilization Account) Advisory Committee.

The amazing depth and breadth of Hector Delanghe’s commitment to agriculture and particularly to the fruit and vegetable sectors, makes him a very worthy inductee into the Ontario Agricultural Hall of Fame.