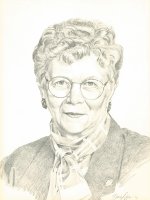 A devoted worker in her community, Hilde Morden of Rodney, Ontario, is best known for her contributions to the betterment of rural life in Ontario.

Active at all levels of the Federated Women’s Institutes of Ontario (FWIO), Hilde accepted two challenging positions as Program Co-ordinator and, later, as New Branch Organizer. As Program Co-ordinator, she worked with the Recycling Council of Ontario and was successful in encouraging all Women’s Institute members to be part of the environmental movement and later accepted an award from the Recycling Council on behalf of FWIO. In her position as New Branch Organizer, Hilde developed the criteria for working with New Branch Organizers in each of the 14 areas in the province. As a result, several new branches were started across Ontario.

Hilde Morden’s expertise has been sought by many organizations and she has served as a delegate to the 1st and 2nd National Farm Women’s Conference, advisor to Southwestern Women for the Support of Agriculture and as a member of the Institute of Cultural Affairs. In 1986 she served on the Advisory Committee, Ridgetown College of Agricultural Technology. A source of knowledge and encouragement to many people, Hilde has acted as public speaker and seminar facilitator for human relations, communications, museum interpretation and parliamentary procedures.

In recognition of her service to the agricultural industry and the rural community, Hilde Morden has been awarded the Ontario Bicentennial Medal in 1984, Ontario Ministry of Agriculture and Food Centennial Award in 1988, and the Women’s Institute Certificate of Merit in 1991.